June 8, 2016
Post by IIB’s Tim Smith
I had the great pleasure of joining my IIB colleague Jonathan Crum in Indianapolis this past Saturday evening at the Fifth Annual Burmese American Community Institute (BACI) Awards Ceremony Dinner. The celebration was held at the University of Indianapolis with over 200 community members attending the event. Former Indianapolis Mayor Greg Ballard greeted guests and offered opening remarks, “What the Burmese American Community Institute is doing for Burmese refugees in Indianapolis is remarkable.” He continued and cited how vital the Burmese Chin population is to the city of Indianapolis, and praised BACI for their outstanding advocacy efforts and commitment to educational programming for the Chin community.
Currently, there are over 13,000 Burmese refugees living in Indianapolis.
The important annual event is primarily held to offer recognition awards to community partners, businesses, educators, and friends of BACI who have supported the Burmese Chin community in Indianapolis. The evening’s festivities also included Chin cultural dances, songs, music, and Burmese food.
Mr. Elaisa Vahine, Executive Director of BACI, spoke of his vision to build a thriving, self-sufficient, and sustainable, integrated Burmese Community in Indianapolis through advocacy, education, and employment.
BACI was established in 2011 to proactively respond to the growing needs of the Burmese refugee population in central Indiana.
“Many of you did not believe I would stay for one-year; I have now been here for five!” Vahine said and smiled.
Since its inception, BACI has assisted more than 2,000 individuals through its various programs. BACI’s main source of funding is grants from governmental agencies and local foundations.
Dr. Ro Dinga, Board Chair of BACI, challenged the community members and leaders, “All community members including the educated and leaders, let us continue to build a strong and self-sufficient community here, and if we are strong here, we can also rebuild a strong community in Burma.”
IIB is actively working in Myanmar (also known as Burma) to build its business and education systems. Learn more about our capacity-building work HERE.

The five-day seminar provides an in-depth look at how to practically apply entrepreneurial ideas and innovation-based concepts into academia and businesses.

With close to 140 faculty and students–mostly women from Yangon Institute of Economics–in attendance, two separate interactive sessions were held.

First titled “Adding Entrepreneurship and Innovation to Your Syllabus,” the faculty sessions concentrated on how instructors could help their students start a business by incorporating entrepreneurship and innovation-based concepts into their syllabi. Visiting IU faculty and staff discussed the importance of entrepreneurship for student’s future success, as well as identified different classroom teaching methods and pedagogy frameworks and mechanisms to properly be adapted into any subject to increase student’s entrepreneurial knowledge and innovative capability.

Student sessions titled “Being Innovative by Being an Entrepreneur” were specifically tailored to inform that entrepreneurship is an attitude, a process, and a goal; that an entrepreneur takes ideas and moves them through to reality in a scalable way; and, the entrepreneurial mindset leads to both new businesses and improvements to existing organizations. In this workshop, students learned various ways to enhance and build entrepreneurial skills through problem identification, business model innovation, strategic problem solving, team building, effective communication, and feasible idea-generation techniques.

ADEPT is a public-private partnership funded by USAID with the IIB, in collaboration with major alliance partners Hewlett Packard (HP), the VinaCapital Foundation’s Lotus Impact fund, and Business for Social Responsibility (BSR).

This visit vastly contributes to ADEPT’s core mission–to bring a lasting legacy of entrepreneurship skills, opportunities, and capacity building to the business and higher-education of Myanmar.

June 7, 2016
April 6, 2016, marked a day of achievement for the Indiana University Center for International Business Education and Research (IU CIBER) as it successfully held a one-day conference for “Doing Business In and With Russia and Ukraine” at Indiana University-Purdue University Indianapolis (IUPUI).
The day kicked off with a keynote address from Dr. Mark Pomar, founding president of the U.S. Russia Foundation for Economic Advancement and the Rule of Law (USRF). Dr. Pomar shared his knowledge and thoughts on “Building an Innovative Russian Economy” and drew the crowd’s interest in on the topic with great stories of his personal experiences.
The first panel was moderated by IU SPEA Professor Robert Kravchuk. Senior International Trade Specialist Dusan Marinkovic with the U.S. Commercial Service of the U.S. Department of Commerce and Policy Team Director Danica Starks for the Office of Russia, Ukraine and Eurasia of the U.S. Department of Commerce sitting in as panelists. Mr. Marinkovic and Ms. Starks presented on the “Federal and State Promotion of Trade with Russia and Ukraine.”
The day ended with “Hoosier Business Connection: Perspective on Business with Russia and Ukraine” led by IU Kelley Professor Sasha Fedorikhin, as well as panelists Vice President Oleg Gostomelsky of Hoosier Gasket Corporation, President & CEO Dennis Kelley of Pacific World Trade, and Dr. Mark Pomar.
Both sessions were interactive with interesting questions and comments from both the audience and the speakers.
IU CIBER continues to hold annual “Doing Business In and With…” Conferences with plans for the next event to be held in May 2017. Watch for details at our IIB website.
Videos of the keynote address and both panel sessions are accessible on CIBER Media or click the links provided on texts.

May 26, 2016
With close to a month left before IU CIBER’s 2016 BIG summer program, Kelley Institute for International Business (IIB) Director of Programs Christine Davis and IU CIBER Program Manager Emily Bagienski gave a 30-minute webinar presentation and Q&A about BIG on Wednesday, May 25, 2016. 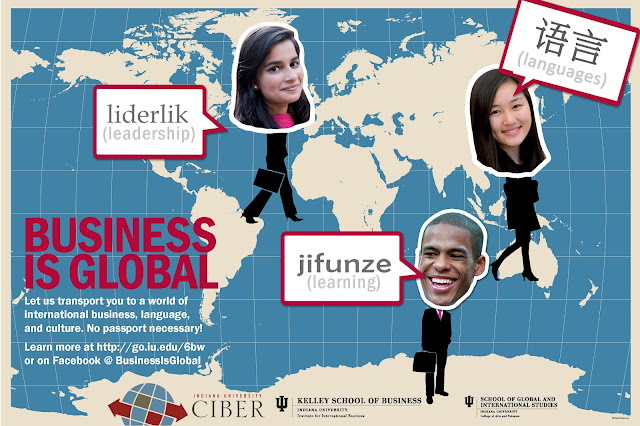 This year marks the fourth anniversary of the BIG program launch. Open to rising high school sophomores, juniors, and seniors, students explore and learn the intersection of business, language, and culture. The intensive program’s curriculum is supported by area study centers and departments in the IU School of Global and International Studies and introduces students to less-commonly taught foreign languages and their associated cultures–Mandarin Chinese (East Asia), Swahili (East Africa), and Turkish (Turkey and Cyprus).
In addition, students gain a basic understanding of business vocabularies and a general overview of how businesses operate through an accelerated curriculum based on the Kelley School of Business’ top-ranked Bloomington undergraduate program.

Since the program’s inception in 2013, 11 BIG alumni have gone on to attend IU, and of them, seven are pursuing degrees at Kelley School of Business. Interested in watching the recorded webinar? Click HERE.

May 16, 2016
For businesses and organizations alike, protecting ideas and intellectual property are crucial–especially for small-to-medium-sized enterprises and institutions. In order to assist and empower those who need such help the most, Indiana University’s Maurer School of Law established the Intellectual Property Clinic to offer free, pro bono services for entrepreneurs, while allowing IU law students to gain practical and realistic experience and learning by consulting the Clinic’s clients.

In this interview, IU Clinical Associate Professor at Maurer School of Law and Director of the Clinic Norman Hedges speaks about the important work the Intellectual Property Clinic is doing, and how imperative it is for businesses to properly protect their ideas, innovations, and works for sustainable growth and success.

On April 8, the first Symposium on Sustainable Development was held to provide attendees with numerous viewpoints on the current state on sustainable development and the challenges of creating a sustainable future. For 2016, the focus was on energy and the challenges facing sustainable energy development worldwide.
The day started with an introduction from Indiana University History Professor Dr. Stephen Macekura on the history of sustainable development. The first panel of the day was on the topic “Alternative Energy Sources” and the following speakers presented their arguments:
The second panel of the day was on the topic “Traditional Energy Sources & Sustainable Development” and the following guests shared their presentations:
The day concluded with a Day-in-Summary Discussion involving all of the day’s panelists in which the questions posed in Dr. Macekura’s Introduction were revisited and questions were taken from the audience as well.
A copy of the Synopsis of the Day will be available on IU CIBER soon. Stay tuned for next year’s IU CIBER Symposium on Sustainable Development!
The 2016 Symposium was co-sponsored by the IU Center for International Business Education & Research, the Center for the Study of Global Change, the Center for the Study of the Middle East, the East Asian Studies Center, and the Inner Asian & Uralic National Resource Center.

May 9, 2016
The United Nations revealed the post-2015 Sustainable Development Goals not too long ago with a focus on positively transforming the world by 2030. While the 17 streamlined goals are meant to be global, IU is leading its own sustainability efforts ahead of its bicentennial anniversary in 2020. In this session, IU Office of Sustainability Director Bill Brown shares what his office and the school are doing to promote a thriving culture of sustainability, and what organizations and businesses could do to further bolster this movement.

May 4, 2016
On Wednesday, April 13, 2016, Bethlehem Business Incubator (BBI) welcomed more than 130 guests from various public organizations and private companies at its public launch in Bank of Palestine-Bethlehem Branch.
Some notable attendees at the media-frenzied, popular occasion included U.S. Consul General of Jerusalem Donald Blome, Bank of Palestine Chairman Hashim Shawa, Bethlehem Mayor Ms. Vera Baboun, Bethlehem University Vice President for Academic Affairs Dr. Irene Hazou Makhoul, Bethlehem University Dean of Shucri Ibrahim Dabdoub Faculty of Business Administration Dr. Fadi Kattan, and Bethlehem Development Foundation CEO Mr. Mazen Karam. IIB Executive Director LaVonn Schlegel and Director of Programs Christine Davis traveled from Bloomington to Bethlehem for this exciting event.
BBI is housed in the Bank of Palestine-Bethlehem Branch location. BBI serves at the forefront of the program to achieve the goal of fostering sustainable growth by enhancing the entrepreneurial environment in the West Bank.
The long-awaited event is just the beginning to spearhead BBI’s goals and mission to incubate, mentor, and support local start-ups, entrepreneurs, students, and faculty–particularly women and youth who are interested in the non-Information, Communications, and Technology (ICT) sector.
At the launch, the region’s non-profit and business leaders expressed their excitement over the immense economic and creative innovation potentials BBI is ready to explore. From training services, workshops, mentorships, networking opportunities, to internships, BBI will help its clients receive follow-on investments to increase their chances of sustaining their business even after leaving the Incubator.
In addition to providing business development and incubation services, BBI is dedicated to promoting local engagement and outreach through public entrepreneurship educational services and forging local cooperation and partnerships with NGOs, need-based entrepreneurs, various community organizations and schools across the region.
Sponsored by the United States Department of State project Building Entrepreneurship Excellence And Developing Economic Enterprises (BEEADEE), BBI is one of this three-year, $1.5 million program’s integral component. Both the BEEADEE project and BBI is carried out by Indiana University’s Kelley Institute for International Business (IIB) in collaboration with Bethlehem University (BU) along with generous support from Bank of Palestine.

Inside Look at the Cuban Economy: Tourism Industry and Beyond with Ms. Alicia Perez Viera

April 12, 2016
A Cuban native, Ms. Perez has worked as a tour guide for the island’s national tourism component Havana Tour for more than a decade. Having majored in English language and education from the University of Pedagogical Sciences in Havana, most of her career has revolved around Cuba’s education services and developing tourism sector.

As an experienced practitioner and local tour guide, Ms. Perez gives us her take on the current tourism and hospitality industry challenges and opportunities in Cuba, and how the restored U.S.-Cuba relations can bolster the island nation’s socio-economic state.